Happy Friday, peeps!  No challenges today, but I was inspired by my friend Michele when I saw her mitten post here.  (She is SO creative!)  Instead of a mitten, I thought I would make a couple of projects using the Cable Knit embossing folder...and the first one is a little hat: 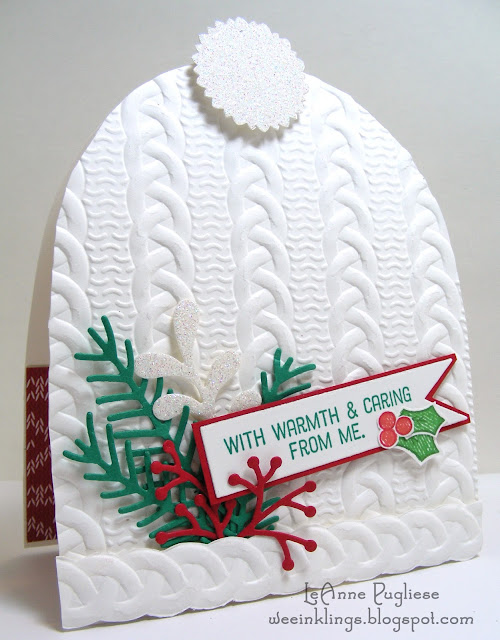 I drew a hat pattern, cut two hats from white cardstock and embossed one with the EF.  I embossed another smaller piece and trimmed it along a cable to create the bottom portion of the hat: 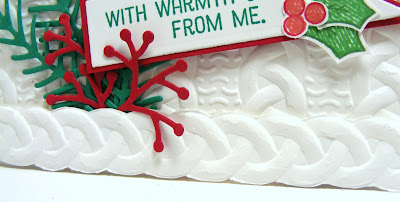 I watched this video (it's long and the tutorial is towards the end, but it's a great video) to show how to create a fold at the top of a shaped card, and then I added a Dazzling Diamonds glimmer paper "pom pom".  I created it by punching a 7/8" scallop, then adhering it to a scrap, turning it a wee bit and repunching it: 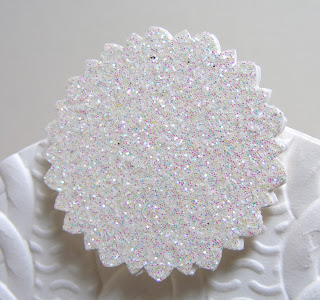 I didn't have cute little greenery like Michele did, but I cut some diecuts from the Pretty Pines thinlets instead.  I made a little banner with a sentiment from Flourishing Phrases and added some holly from Stitched with Cheer:

And surprise...I added some Warmth and Cheer DSP on the inside to create a little pocket for a gift card!  I adhered it right along the very edges with Tear 'n Tape: 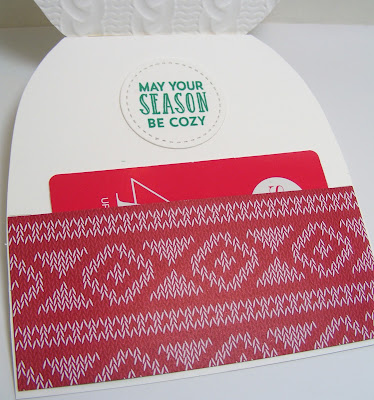 I added a sentiment from Stitched with Cheer and it was all done!  Just make sure when you assemble it that you measure the length; if your pompom extends too far, you won't be able to stick it in an envelope!  And while perusing Pinterest in the wee hours of a sleepless night, I saw gazillions of Ugly Christmas Sweaters, so I did this one, just for fun! 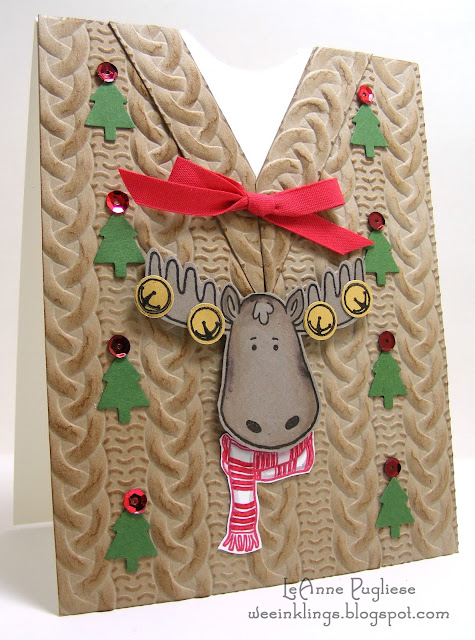 It's hard to see, but it's mounted on a white "t-shirt", and his bells are cut from gold foil!  Even DH knew what it was!!

December 1 meant that Cassidy got to set up her Advent Calendar!  Dana told me she was up at 5am, and she told her to go back to bed, LOL!  6:15 and she couldn't wait any longer: 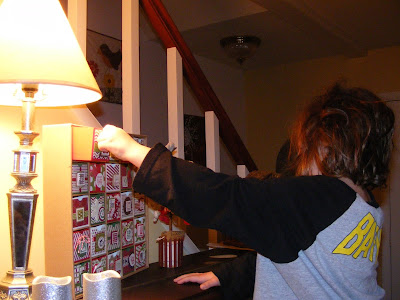 A wee little bit of candy to go with the bedhead! 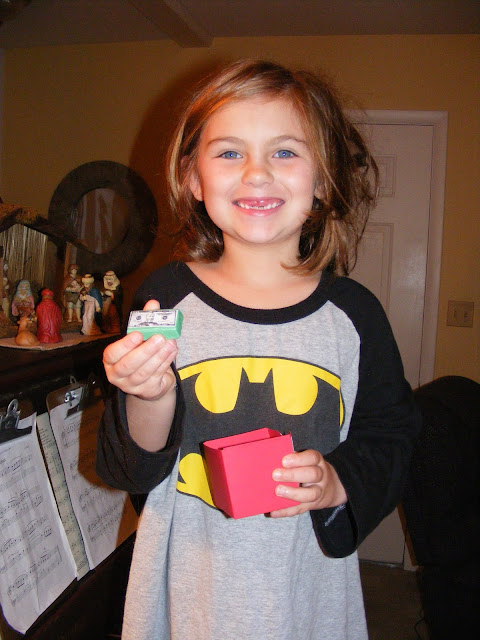 Such cute projects today, LeAnne! Love that adorable hat gift card holder you created with the Cable Knit EF!!!! So pretty with the Pretty Pines on the brim! Even your ugly sweater is adorable with the moose and the gold foil bells! Love, love, love! Cassidy is cute with her bedhead too! Isn't so nice to see how excited the little ones get with the holidays! Enjoy! TFS and have a wonderful day! :)

I can see Cassidy wearing a cute hat like that. The card is fantastic. I will probably break down and order the cable EF eventually but there were too many other things I wanted yesterday! Can't wait for my pre-order to arrive. Cassidy's anticipation for the advent calendar is understandable!! Have a great weekend.

This has to be your best Christmas post so far! I can't wait to CASE your clever gift card holders. Cassidy is adorable in her enthusiasm--reminds me of my kids at Christmas time with all their excitement.

Wow!! I just love love love these project LeAnne!! I have been wanting to do something with this embossing folder and you've given me some great inspiration with it!! That sweater is just too stinkin' cute! LOL!! Off to check out the video too! Thanks for sharing!

To think I may have had even the tiniest bit of influence is delightful, LeAnne! Thank you! OH do I LOve your hat!!! Gorgeous embossing folder there, my friend! and Cassidy's zest for Christmas tradition!
=]

OMG! I have nothing else, just OMG!

The hat is a fun idea and your sweater is the best.

Oh golly that hat is just too cute!! And the sweater...you are so creative LeAnne. These are wonderful wintery projects!! How cute is Cassidy! Love that she was excited for her advent calendar!!

These are just adorable! I love, love, love that hat, what a great card. The sparkly pom-pom on top is perfect. And that sweater, you can't call that ugly, only cute, cute, cute! Awesome inspiration!

Leanne: These are just adorable...Stinkin' Cute! Love how you made the mitten into a gift card holder. And, Your Ugly Christmas Sweater; no way!!! It's just so darling!!!!
Thanks so much for sharing with us and for the smile!!! 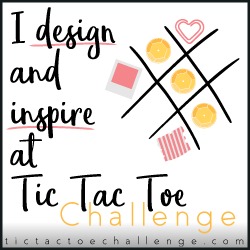